Vision:CLEAN UP TOLEDO sparks a new sense of pride, community 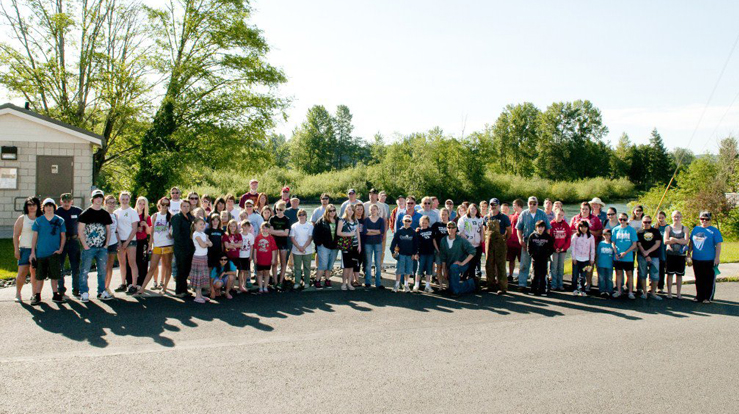 On the brightest, sunniest and driest day of the year so far, downtown Toledo got spa treatment, while community members of all ages gathered to make a difference.

Vision:CLEAN UP TOLEDO kicked off the June 4th effort at 8:30 a.m. by the downtown riverfront, where people gathered with their group, formulated plans and headed out with tools in hand.

Several blocks along SR-505 (Cowlitz) and Ramsay Way were pressure-washed while crews repainted buildings and curbs. Gone now are some 80s-era pink and mint paint colors in favor of a new coat of blue, tan and green.

New plants, new paint, and new sense of pride is clearly visible at every turn Toledo’s commercial district, which was devastated from a Christmas-day fire last year.

In addition, scores of local residents took on the daunting task of weeding, brush cutting and rubbish collection not only downtown but in other parts of the community.

One ambitious group headed to the high school to do a much needed makeover and repair on the tennis courts, while other multi-generational groups headed to the park, churches, schools and other high-traffic areas.

“There were well over 150 people who gave up a good portion of their day to be a part of beautifying Toledo and showing their pride,” according to Mike Stavig who spearheaded the event. Many businesses and just about every area organization contributed in one way or another to Vision:CLEAN UP TOLEDO.

Elaine Schillinger, who spent the day painting alongside granddaughter Rylan, said she enjoyed painting and getting to know another woman who has been in Toledo for the last six months to help care for her grandson, while his father is stationed with Air Force Special Forces in Afghanistan.

“She told me she just thought it would be good for the both of them to get out and help with the clean up efforts,” said Elaine.

“I can’t say enough how great it feels to be the Mayor of Toledo. The people of this town our the best. A big thank you for all the hard work,” said Jerry Pratt, mayor of Toledo. “People stepped up today and saved the city money. We didn’t have this in the budget,” said Pratt.

After the first successful Saturday Market last weekend, newcomers will get a cleaner and likely livelier Toledo next weekend. With July’s Cheese Days just around the corner, residents and visitors will see a town that is clean, and clearly shows that people still take great pride in Toledo even despite economically challenging times.

More photos of some of the day’s efforts can be viewed on our facebook page.

The mission of Vision:TOLEDO is to efficiently utilize resources, to enhance the quality of life for the greater Toledo, Washington community.

Have ya heard? Our local U-17 team has just gotten the invite to THE WORLD SERIES playoff in Ohio! These kids have played together for the last 5 years or so & have quite the Cinderella Season! They need your help to become NATIONAL CHAMPS!!! They are collecting donations for hotel stay & need $6000 secured by WEDNESDAY! Please message Connor Vermilyea for more info on how to donate! ... See MoreSee Less