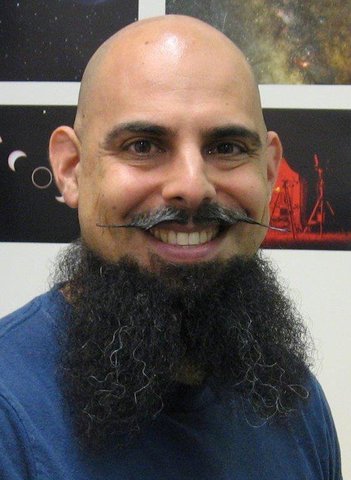 Astrophysicist and celebrity scientist Ethan Siegel will explain gravitational waves and answer questions about deep space at the Toledo Community Library on Thursday, April 21, 2016, at 7 p.m.

Siegel is a resident of Toledo and said he was delighted by the community interest in the discovery of gravitational waves. Dr. Siegel will explain the significance of the waves and how this changes our understanding of the universe, and he will also answer space questions and sign copies of his new book “Beyond the Galaxy: How humanity looked beyond the Milky Way and discovered the entire Universe.”

For millennia, humans struggled to make sense of what’s out there in the Universe, from all we can see to that which lies beyond the limits of even our most powerful telescopes. Beyond the Galaxy traces our journey from an ancient, Earth-centered Universe all the way to our modern, 21st century understanding of the cosmos. Touching on not only what we know but also how we know it, Ethan Siegel takes us to the very frontiers of modern astrophysics and cosmology, from the birth of our Universe to its ultimate fate, and everything in between.

“Whether you are learning about the Universe for the first time, taking an introductory course or looking for the latest update on modern developments in the story of what we know about the Universe and how we’ve come to know it, this book is designed to start at the very beginning of human exploration and take you through the most important developments that led to our present understanding of all there is,” Siegel said.

“Beyond the Galaxy” is for sale on Amazon: http://amzn.to/1o6Opza

The mission of Vision:TOLEDO is to efficiently utilize resources, to enhance the quality of life for the greater Toledo, Washington community.

Have ya heard? Our local U-17 team has just gotten the invite to THE WORLD SERIES playoff in Ohio! These kids have played together for the last 5 years or so & have quite the Cinderella Season! They need your help to become NATIONAL CHAMPS!!! They are collecting donations for hotel stay & need $6000 secured by WEDNESDAY! Please message Connor Vermilyea for more info on how to donate! ... See MoreSee Less