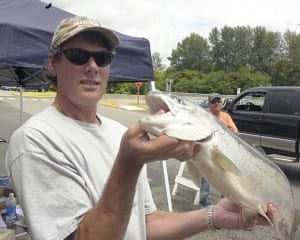 Drizzle on another cool summer day didn’t seem to dampen the enthusiasm of the 61 kids and adults who showed up for the inaugural Toledo Steelhead Fishing Derby.

Contestants gathered on the banks of the Cowlitz River or in a boats on the chilly water July 16 in an effort to catch the biggest steelhead and claim cash prizes.

Anglers landed and weighed in 21 steelhead, the biggest coming from Ron Nowlen of Toledo at 12.5 pounds.

Following the Derby, participants enjoyed a free barbecue together as over 60 prizes were given away, including $200 for the biggest fish, $100 for the second biggest, and $50 to the mystery weight which was seven pounds.

Steelhead, which are actually an ocean-returning trout and not salmon as many think, are larger than a normal Cowlitz River trout but seemingly small compared to salmon. Unlike salmon, steelhead can spawn as many as three or four times in their life span.

None of the winning fish ended up in the celebration barbecue, as participants got to keep their fish.

“Next year we hope to generate even more interest in this event as it was fun to see everyone of all ages enjoying the day on the river, even, despite the weather,” says Rick Lovell, coordinator for the Toledo Steelhead Fishing Derby.